Amazing news that Jeff Lynne and ELO will be playing their first UK gig since 1986 this September – exciting news indeed. They play BBC Radio 2′s ‘Live in Hyde Park’ festival on September 14th. 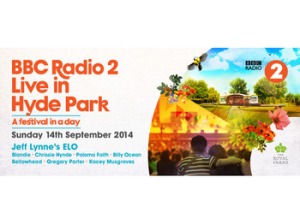 The gig has already sold out and if a success who knows maybe more UK dates? A gig in his home town at Birmingham NEC would be a must I would have thought.

There will be a full orchestra backing ELO too. Not sure who will be in the band at this stage, although Jeff Lynne’s long time ELO collaborator Richard Tandy will be involved I am sure. If drummer Bev Bevan can be tempted back on stage what a line-up that would be!

Along with Queen, ELO are the one band I like above all the other varied bands, artists and musical styles I enjoy. Never thought I would see ELO playing a full gig again here in the UK

A place for me to enthuse about music and books  plus of course my ongoing support of the mighty Potters, Stoke City!

Please feel free to comment as opinion on here is free but no spamming please.

Check out the interview pages that feature some older 10Q’s interviews that have only posted on a Yahoo Group plus a couple of interviews with two crime writers.