This year I’m taking part in the Staines 10K on 16th May 2010 to raise money for The Macular Disease Society and I’d really appreciate your support.

*** I am running the whole race in a Shirt Of Hurt to further boost funds. This idea came from Danny Baker for Sports Relief where you wear your sports rivals top usually only for a few minutes but for me it will be for at least an hour. Being a lifelong Stoke City supporter it had to be that ‘other’ team in Stoke, Port Vale. ***

You can help either by giving a donation, a pound makes all the difference especially if you can add Gift Aid.

Another great way to help is to publicise the work of the Macular Disease Society www.maculardisease.org

It’s easy to donate online with a credit or debit card – just go to my JustGiving page: http://www.justgiving.com/staines2010

I hope you’ll join me in supporting The Macular Disease Society.

What is macular degeneration?

The Macular Disease Society aims to build confidence and independence for those with central vision impairment.  We are the only UK charity dedicated to helping people with macular degeneration.

The photograph above shows how someone with age-related macular degeneration will see things. As you can tell it is particulary distressing as you can’t see your family or friends properly.  It is a degenerative disease of the macula and once vision is lost it can’t be restored but if caught early enough it can be slowed by laser treatment and/or injections into the eye.

Although normally present in the over sixty-fives there are increasing cases of much younger people contracting AMD. If you know someone who is under 65 and has AMD please get in touch as I would be keen to hear from them.

– The Jokers, whose debut album ‘The Great Rock ‘N’ Roll Show’ made my year end top 1o, donated  a signed copy of their debut album and  a couple of signed CD singles and posters.

– Guitarist Vinny Burns (Ten/Asia/Dare/Bob Catley) has kindly donated a guitar lesson with him at his own studio. The winner came all the way over from Germany and had a very enjoyable afternoon made even better in that he caught the train back with Magnum’s Bob Catley! 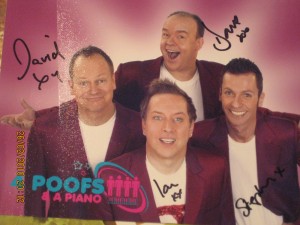 A place for me to enthuse about music and books  plus of course my ongoing support of the mighty Potters, Stoke City!

Please feel free to comment as opinion on here is free but no spamming please.

Check out the interview pages that feature some older 10Q’s interviews that have only posted on a Yahoo Group plus a couple of interviews with two crime writers.